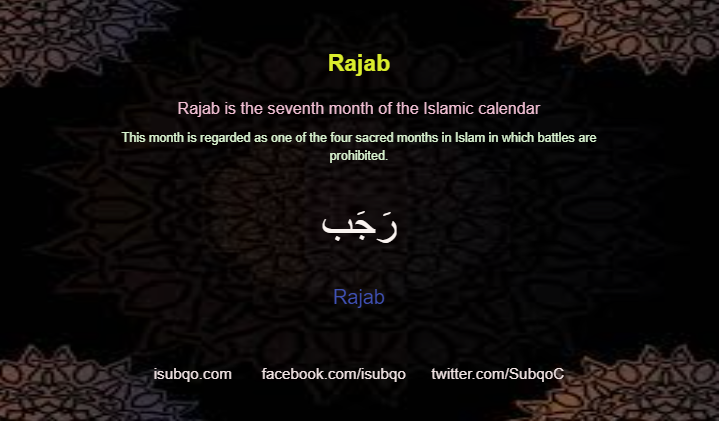 Rajab is the seventh month of the Islamic calendar and it is the month which comes after Jumada Al Thani. Rajab 2023 starts from 22 January to 20 February 2023.

The word "Rajab" came from "rajūb (رجوب)", the sense of veneration or glorification, and Rajab was also formerly called "Mudhar" because the tribe of Mudhar did not change it but rather expected in its time other than the rest of the Arabs, who changed and altered in the months according to the state of war.

Rajab is also the month during which Isra' Mi'raj of the prophet, Muhammad (SAW) , took place.

Dua in the Rajab month

O Allaah, make the months of Rajab and Shabaan blessed for us, and let us reach the month of Ramadhaan.

The Islamic calendar is a lunar calendar, and months begin when the first crescent of a new moon is sighted. Since the Islamic lunar calendar year is 11 to 12 days shorter than the tropical year