What Are the Importance of Fajr and Isha Prayer 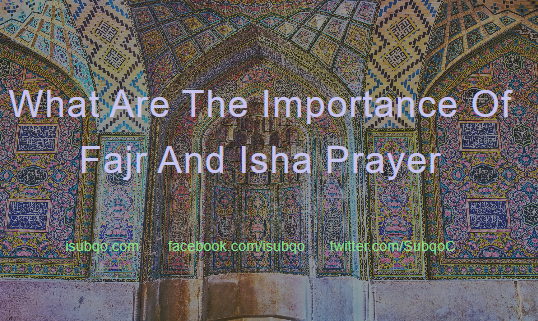 All Muslims in the world must perform Salaah five times a day, namely Fajr, Dhuhur, Asr, Maghrib and Isha. There is a great implication in praying daily, as it improves the link between them and Allah (SWT). It also serves as a means of forgiveness of sins and earning of lots of blessings from Allah SWT.

Although every Namaz is equally important, but Fajr and Isha are considered as a measure of differentiating between Momineen (true believers) and Munafiqeen (pretenders of faith).

“The most difficult salah for the munafiqeen is isha and fajr. Had they known the rewards for them they would have attended them even if they had to crawl on their knees.”(Bukhari)

See other Hadith which says the importance of Fajr and Isha prayer:

"The Prophet (PBUH) said: 'If the people knew what (reward) there is in the Isha prayer and Fajr prayer, they would come even if they had to crawl.'" (Sahih)

"The Prophet (PBUH) said: 'The most burdensome prayers for the hypocrites are the Isha prayer and the Fajr prayer. If only they knew what (reward) there is in them, they would come to them even if they had to crawl.'" (Sahih)

As, it generally gets tougher to pray at the times of night and early morning, so it vastly increases the reward for executing Isha and Fajr, and the incentive itself could not be any better than being included among the ranks of the staunch disciples of Islam. Moreover, since it is our common belief that prayers always have a soothing effect on its practitioner, so does Isha, in the form of a pleasant sleep at night.