Rewards for those who Recites Quran 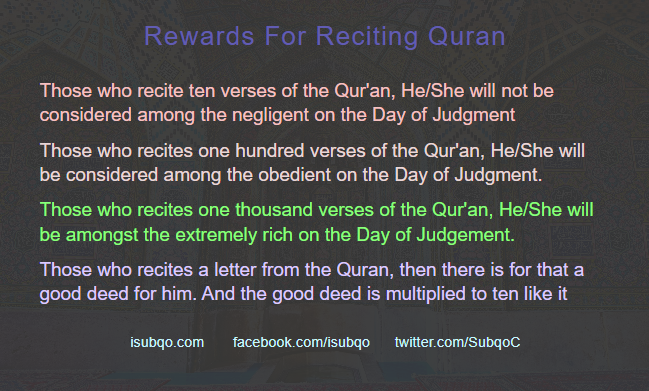 Those who recite ten verses of the Qur'an, He/She will not be considered among the negligent on the Day of Judgment

Those who recites one hundred verses of the Qur'an, He/She will be considered among the obedient on the Day of Judgment.

Those who recites one thousand verses of the Qur'an, He/She will be amongst the extremely rich on the Day of Judgement.

For those who recite one hundred verses in a night, it is written for him as obedience to Allah for the night.

Whoever recites the Surah al Ikhlas ten times, Allah will build for him a house in Paradise.

For those who recite "Qul Huwa Allahu Ahad," (surah al-Ikhlas), it is as if he has read a third of the Qur'an.

For those who recite "Qul Huwa Allahu Ahad," (surah al-Ikhlas), ten times, Allah will build for him a house in Paradise

Those who recite "Qul ya Ayyuhal Kaafirun," (surah al-Kafirun), will be equivalent to a quarter of the Qur'an.

"If anyone recites the last two verses of Surah al-Baqarah at night (2:285-286), they will suffice for him.

That is, these two verses will bring him a reward equivalent to that of a night prayer, and will safeguard him from any hurt during that night. Ibn Khuzayma in his Sahih mentioned it in the chapter "The Recitation of the Qur'an Equivalent in Reward to a Night Prayer"

Whoever recites the verse of the Throne after every compulsory prayer, Will not be forbidden entrance to Paradise. Ibn Hibban and An-Nisa'i - sahih

Whoever reads Ayatul Kursi after every Fard Salah, will be under the protection and security of Allah.

Whoever says upon leaving his house: "In the name of Allah, I trust in Allah, there is no movement and no power except with Allah, It will be said to him: "You have been contented and you took precaution", Satan will turn away from him.

Whoever says: "I seek refuge with the perfect words of Allah from the evil that He created" three times in the evening, He/She will not be harmed by the bite of a serpent during that night.

Whoever says in the evening: "In the name of Allah with whose name there can be no harm in the earth or in the heavens and He is the Hearer the Knower" three times, He/She will not be afflicted with a sudden calamity before morning.