It is highly recommended to recite or read the Quran, the final word of Allah (SWT), at all times, at least completing it twice in a year. The reports from the companions show how some of them completed the Quran in five days, some in four while others in three days. Imam An-Nawawi (raa) said: "The speed must depend on the condition and situation of the person and what he or she does for a living." The recitation of the Quran should not be the reason to become slacked in your other responsibilities. The speed of your recitation must be regulated by the ability to understand, because the Quran encourages the reciter to ponder about what he or she reads. Allah states: "Here is a Book which We have sent down unto thee, full of blessings, that they may meditate on its signs, and that men of understanding may receive admonition." (Al-Qur'an, 38:29)

This verse indicates that the Quran was revealed for the maximum encyclopedic benefit, mercy, and guidance to the human race. That is why He (SWT) described it as blessed, (mubarak). These blessings can be realized to the fullest only if the reader meditates and thinks through its divine words, containing layers of insights and wisdom and life-long experiences of the human race - of how to live a better life both spiritually and materially -which can never be found in any other book.

In a hadith by 'Aishah (raa), reported by Al-Bayhaqi, she said: "The house in which the Quran is recited is seen by the heavenly world as the stars are seen by the earthly world." This hadith indicates some of the meritorious aspects of this most authenticated book of Allah. The home in which its residents recite this book is illuminated as brightly as a star on the face of the earth, and is visible in outer space.

As a preparation for reading, it is recommended to have cleanliness, (taharah), by making wudu before settling down to recite the Quran. for the recitation of the Quran is worship, 'ebadah, namely the best form of remembrance of Allah (dhikir). The Messenger of Allah (saas) disliked making dhikir without cleanliness. Allah (SWT) states in the Quran: "And that is indeed a mighty adjuration, if you but knew. That this is indeed a Qur'an most honorable, in a book well-guarded, which none shall touch but those who are clean." (Al-Qur'an 56:76-79).

It is not a sin, however, to read without wudu if you are unclean from minor impurities that entail wudu before prayer. If you feel like using the restroom for urination, passing wind, etc., stop and go relieve yourself completely, and make Wudu then return to resume your reading. If you are defiled from major impurities, that is, the ones which entail complete bath, (ghusl), it is prohibited to read the Quran during the state of defilement, the agents of which include discharge of semen, sexual intercourse, bleeding as a result of childbirth, and menstruation. However, it is allowed for these people to look in the Quran while not holding it, and they may read it with their eyes and their hearts, but not recite it. [Note: one shouldn't encourage reading Qur'an in a state of defilement, but rather encourage Ghusl first.]

The place you choose to sit to recite Al-Qur'an should be clean from any filth or bad odor. This is why it is prohibited to read it the restroom. While reading the Qur'an, it is recommended to face the direction of Al-Qiblah.

The reciters are commanded to say, I seek refuge, "Ta'awudh", that is, putting a distance between themselves and Satan (Shaytan) by seeking refuge in Allah (SWT) from the rejected enemy, the reason being Satan dislikes to see a servant in communication with Allah. If you do not seek refuge, he may come to distract, confuse, and induce you to doubt. Allah (SWT) says: "When you do read the Quran, seek Allah's protection from Satan, the rejected." (Al-Qur'an 16:98) In the event that you are interrupted during reading, it is advisable to repeat ta'awwudh before you resume. As for the phrase of ta'awwudh, the following is reported:

I seek refuge with Allah (The All Hearing, The All-Knowing) from Satan, the rejected.

The majority of scholars recommend that it be said aloud, especially if there is an audience.

In Islam we are commanded to start every act, spiritual or non-spiritual, big or small, with Basmalah, that is: "Bis mil llahir-Rahmanir-Raheem" (In the Name of Allah, Most Gracious, Most Merciful.) The reason is to seek Allah's blessings for the action you are about to embark on. Undoubtedly, no deed is more deserving or worthy of Basmalah than the 'ebadah of reading the Quran. With the revelation of Bismillahir-Rahmanir Raheem, Allah has educated His Messenger (saas) to make it an unceasing habit of saying Bismillah before reading and before every act.

Basmalah is one of the unique aspects of the Quran as every chapter (surah), except Surah Nine (Tawbah) commences with this most profound statement. It is prearranged as an incomplete statement to be completed, or filled in, if you will, by the servant. For instance, if you want to read, it becomes: I read in the Name of Allah... if you want to eat, it becomes: I eat in the Name of Allah... That is what we mean by an incomplete statement to be completed by the doer.

If you can read the Quran in the Arabic language, it is preferred to recite with the basic rules of tajweed, including rules of chanting (al-ghunnah), prolongations (al-madd), assimilation (al-idghaam), etc. In a report by Bukhari, Anas bin Malik (raa) was asked to describe the way of the Messenger of Allah (saas) in reciting the Quran. Anas said the Messenger of Allah (saas) used to recite with tarteel, chanting, prolonging his long vowels. Anas (raa) gave a demonstration by reciting 'Bismillah' to show how the Messenger (saas) recited it, prolonging the sublime word, Allah, Ar-Rahman, and Ar-Raheem.'"

It is, however, undesirable to read with excessive speed. Reading a part of the Quran, (juzh), slowly, so as to think through what you read, is preferred to reading double the ordinary speed without pondering. The former way is more respectful, and is in accord with the aims of the Lawgiver, than hastily reading through the Book absent-mindedly.

It is recommended to beautify your recital with a pleasant voice. In a hadith by Ibn Hibban (raa), the Messenger of Allah (saas) has been reported as saying: "Beautify the recitation of your Qur'an with your voices." But you should not exaggerate to the point that the phonics, morphology, or syntax are distorted or altered. Reciting the Quran with mistakes, (lahn) is not synonymous with chanting or a pleasing voice. Also, one's recitation should not sound like singing.

I mentioned earlier that it is sunnah to seek to comprehend what you read. The following are some of the ways one should go about tadabur, or pondering through what he reads. The simplest thing is to think out the meaning of the words so as to get a better insight to their meaning and massage.

In the book of Muslim, Huzaifah bin Yaman is reported as saying: "I prayed behind the Messenger of Allah (saas) one night. He opened his recitation after Al-Fatihah with chapter Al-Baqarah, the Cow. Coming to the end of it, he followed it with the chapter An-Nisa, the Women. Coming to its end, he followed it with Chapter Al-'Emran, the Family of Emran). He read them consecutively and when he came to a verse that contained glorification of Allah, he glorified, or a question, he asked, or seeking refuge he sought refuge."

It is sunnah to say takbeer from Chapter Ad-Duha, 93 to the end An-Nas, Chapter 114. The sunnah is to pause at the end of Chapter 93 then say Takbeer. If you are completing the Quran, you do likewise at the end of each surah, chapter, until An-Nas. The sunnah was started after the first revelation was received and after the period of Fatrah, during which revelation was cut off form the Prophet (saas), and the Makkans were saying Allah had forsaken Muhammad. When Ad-Duha was revealed, the Messenger of Allah (saas) said: "Allahu Akbar" (Allah is the Greatest).

The preferred day to start the Quran is Friday, and the best day to complete it is Thursday. The best hour to complete it is the first part of the day or night. For, according to Sa'ad bin Abi Waqqaas (raa), if the completion is in the first part of the night, the angels will pray for you until morning, and if it is early in the morning they will pray for you until evening. Fasting is recommended on the day of completion.

It is recommended to start again after each completion of the Quran. In a hadith reported by Tirmidhi (raa), the Messenger of Allah (saas) has been reported as saying: "The best deeds in the sight of Allah are the deeds of the one who completes Qur'an and resumes again, the one who reads the Quran from the beginning to the end, and whenever he finishes he resumes again."

It is undesirable to stop reading to converse or talk to someone, laugh or play or look at something that takes away your attention, unless there is a valid reason, as has been reported by Al-Bukhari, by the way of Ibn 'Umar (raa). 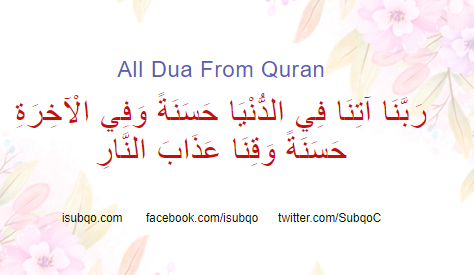 All Dua from Quran 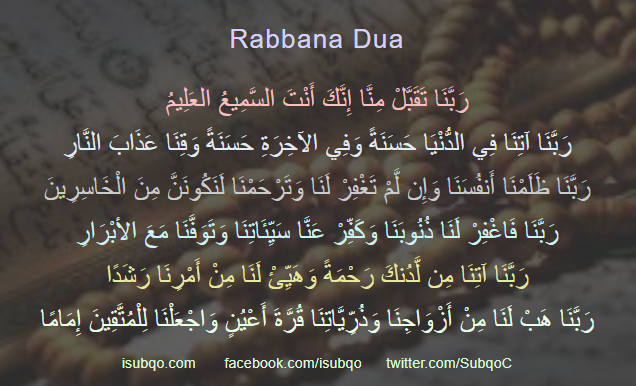 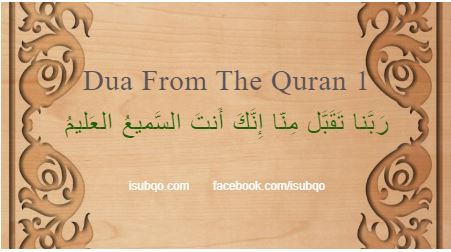 Dua From the Quran 1 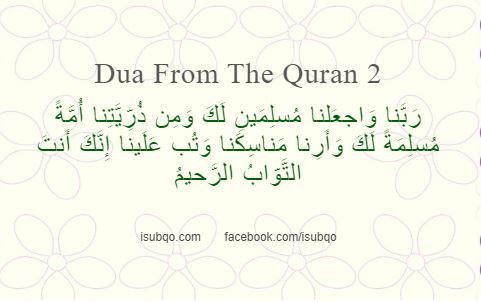 Dua From the Quran 2 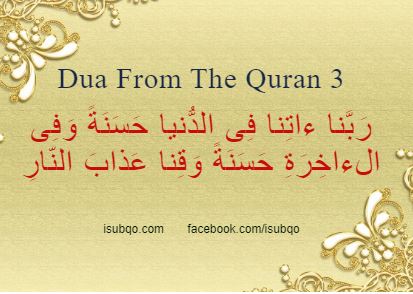 Dua From the Quran 3 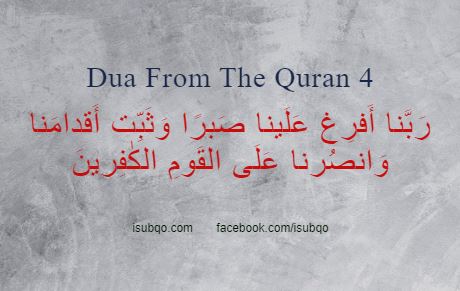 Dua From the Quran 4 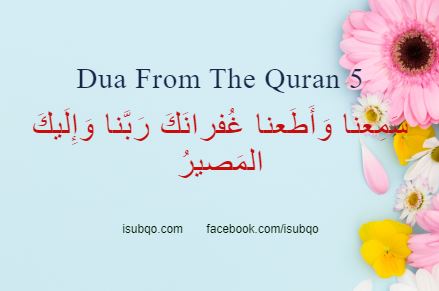 Dua From the Quran 5 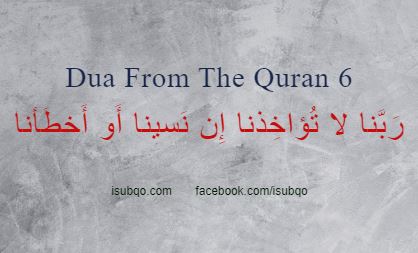 Dua From the Quran 6 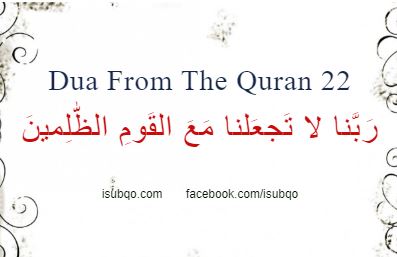 Dua From the Quran 22 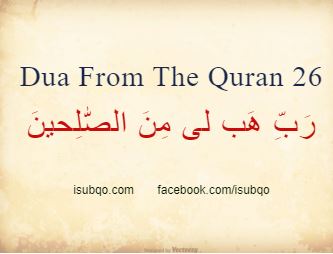 Dua From the Quran 26 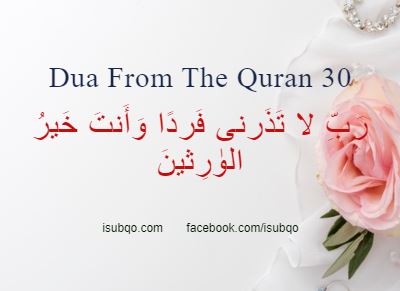 Dua From the Quran 30 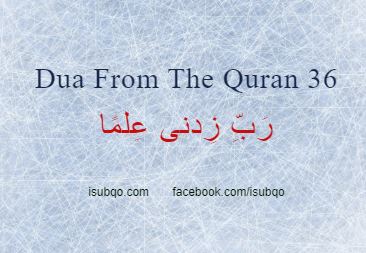 Dua From the Quran 36 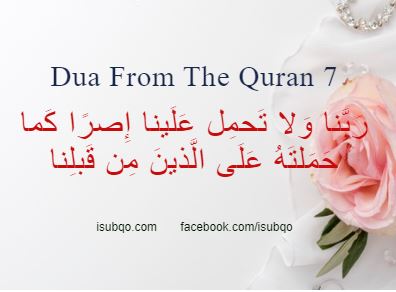 Dua From the Quran 7 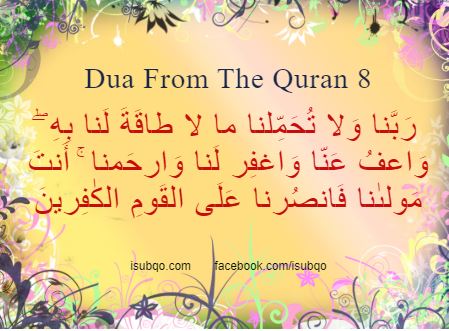 Dua From the Quran 8 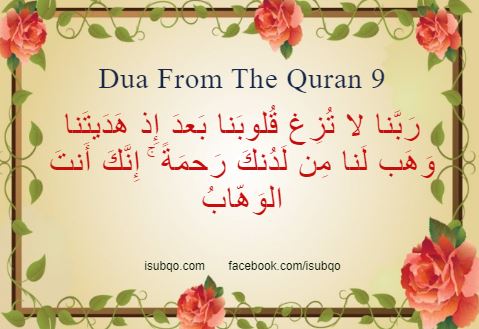 Dua From the Quran 9 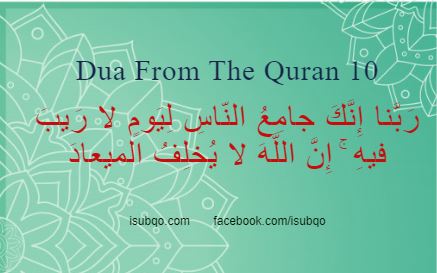 Dua From the Quran 10 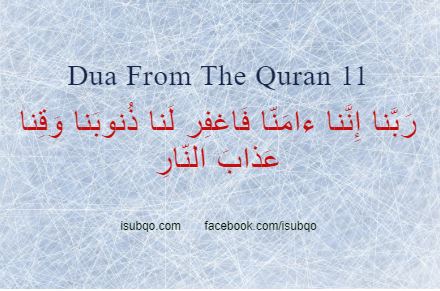 Dua From the Quran 11 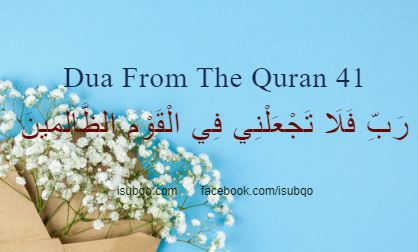 Dua From the Quran 41 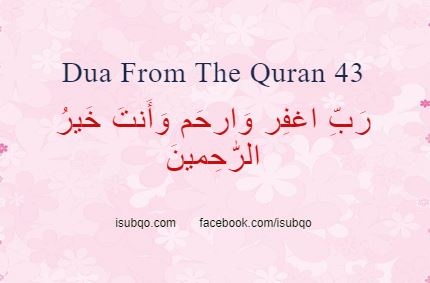 Dua From the Quran 43