Another point that arises out of the hadith of Abu Hurairah is whether the sighting of one region is good for the sighting of the whole Ummah; i.e., should a New Yorker depend on the sighting of hilal in Paris? There is a difference of opinions on this subject. The reason for this dispute is due to a report (athar) from Ibn Abbas. If I may state, there are differences between the hadith from the Prophet (saas) and (athar) a report from a companion. So this report is not the same as hadith.

In this athar, Kuraib (RAA) reported that: "Umm Al-Fadl sent him to Mu'awiyah in Shaam (Damascus). As he finished his business and was preparing to return to Medina, the hilal of Ramadan was sighted in the Shaam area on Friday night, and people started to fast the next day. As he arrived home in Medina at the end of Ramadan, Ibn Abbas (RAA) asked him about his trip. Then they talked about the Hilal. "When did they see it?", Ibn 'Abbas asked. Kuraib informed Ibn Abbas that they saw it Friday night. Abdullah Ibn Abbas wanted to know whether he saw the Hilal. Kuraib replied, "Yes, as well as many people. They fasted, and Mu'awiyah, too, fasted." Ibn Abbas said, "But we saw it Saturday night, and we will continue to fast until we complete thirty days or see it. Kuraib asked him, "Aren't you satisfied with the testimony of Mu'awiyah and his fasting?" `No,' Ibn Abbas replied. He continued, "That is what the Messenger of Allah commanded us to do." (Bukhari/Muslim)

This athar is the base text used by the minority, who ruled that the people in each region should sight their own hilal. Then they disagreed among themselves.

(1) Some said every town and city has its exclusive testimony in that its sighting is not binding on other towns. For instance, sighting in Los Angeles is valid only for the residents of that city, and not valid in San Diego. The testimony in New York City is valid for the New Yorkers and not valid for the residents of Buffalo.

(2) Every town has its exclusive testimony; however, the difference between this and the previous point is that the ruler or the governor can demand that people under his order and in his territorial influence fast according to the sighting of other towns, for to him all the towns are one under his command.

(3) The countries in close proximity depend on each other's testimony. The countries which are far apart, do not. For instance, the testimony in New York City is not valid in Los Angeles, but it may be allowed for the East coast cities.

(5) The last opinion is that of the Jamhur (the majority of scholars). They said the differences in regions, distances, and terrain are of no consequence in determining the testimony of the crescent. The only consideration is the sighting. If the testimony of the hilal is ascertained by even one believer in any part of the world, he or she is obligated to begin the fast. The proof is the direct testimony of the Messenger of Allah (saas), who said: "Fast by sighting the hilal and break by the sighting." (Bukhari/Muslim)

As for the Kuraib report, they explained that it is not proof of the order or strength of the above hadith. It is a known fact among the scholars of Islamic jurisprudence that a report from Sahabi (a companion), Tabi'een (the followers of the companions), and Tabi'e al-tabi'een (the followers of the companions), and the `Ulama (scholars) cannot be used independently as proof and evidence (hujjah). It will be evidence only if the report is direct from the Messenger of Allah and not their independent judgment (Ijtihad) of what they infer or deduce from what The Prophet said. The Kuraib report is in that latter category, i.e., Ibn 'Abbas making Ijtihad, "This the Messenger of Allah commanded us." For that which the Messenger of Allah commanded is the direct Hadith reported in the books of hadith, such as Bukhari, Muslim, and many others:

This hadith does not specify one region from the other. Instead, it addresses Muslims, in general, all over the globe. Because this hadith is general, "`Aam", it will not be made specific "khaas" without another direct hadith from the Prophet (saas), and there is none. If there is no evidence from the Kuraib report, what then is the reason for Abdullah bin Abbas's, (raa) refusal to fast according to the sighting in Shaam? The reason is his Ijtihad, independent judgment, that the distance between the two regions, Medina and Shaam, are far apart and large to the extent that each should have its own independent sighting.

This Ijtihad at best is very weak because it is well known that countries and towns do depend on each other's witnesses and information from all Islamic Sharee'ah areas, and undoubtedly moon-sighting is one of them. Ibn Abbas did not state the text from the Prophet (saas) nor did he state the deduction from any text.

Further examination of this report, unfortunately, reveals that the only evidence he states is the general opinion that Medinians do not depend on the testimony of Shaamians. Indeed, if we accept Kuraib's report, it will mean that Muslims in one region will have difficulty beginning the fast of Ramadan in unity. Thus, international sighting is the correct interpretation and ruling as advanced by the majority of Muslim scholars.

Logistically, it would have been impossible for Ibn `Abbas (raa) to fast according to the sighting of Shaam even if he wanted to for the simple reason that, during that period, it takes express mail seven days from Shaam to Medina. Were Ibn Abbas decided to follow Shaam he and the people of Medina would have to wait seven days to start or end Ramadan? There were no communication devices such as telephones, faxes, and telegrams. May scholars believe that if Ibn Abbas were in a position to know that on the eve of Ramadan or `Eid, the crescent has been sighted in Shaam, he would have started fasting or ended the fasting. Therefore, the athar (the report of Kuraib) would be used if only a group of believers found themselves in a town or country in which they are cut off from the outside world. No city today can claim that. Allah is the best knower. 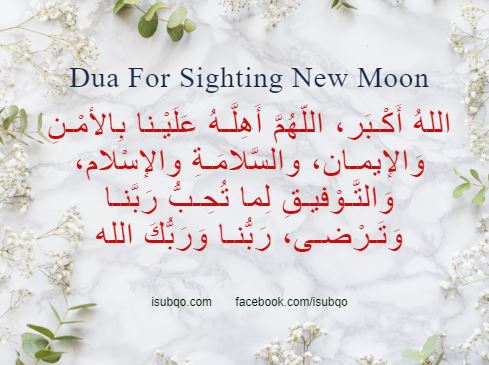 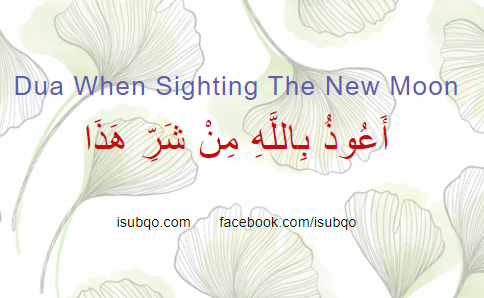 Dua When sighting the new moon 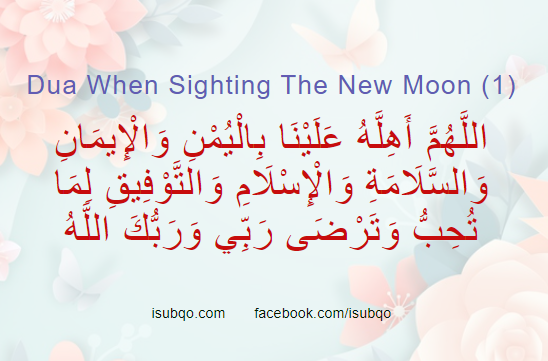 Dua When sighting the new moon (1)

What to say if you see the crescent moon in Ramadan