Tips for Travelling During Ramadan Fasting

The traveler has a choice between fasting and breaking the fast, regardless of the length of the journey: whether the journey is an emergency, for Hajj, to visit relatives, for business, or if he, the believer, is a frequent traveler like airplane pilots, bus and truck drivers, train engineers, or ship captains. As for cab drivers, if the weather is hot, they may change their working hours to nighttime until the weather is cooler. There is one condition: that they are not intending their journey as a masquerade and trick to avoid fasting. If that is the intent, breaking the fast is prohibited and fasting becomes mandatory upon him during the journey.

Allah (SWT) states: "But if anyone is ill or on a journey (the prescribed period should be made up) by days later. Allah intends every facility for you; He does not want to put you in difficulties..." (Al-Qur'an, 2:185) Allah repeated this verse twice to underscore the fact that it is not abrogated with the general command to fast.

The above verse has considered the hardship encountered on a journey as equal to hardship in sickness, and thus allows those faced with either condition not to fast. Perhaps the reason can be found in the very meaning of the Arabic word safar, which implies exposing oneself during a journey to elements of hardship in transportation, food, time and climate changes, and of cultural shocks of all sorts, or just general wear and tear.

Even in this age of jets and supersonic air travel, traveling poses a danger to the sojourner. Because of this possibility, the Lawgiver has permitted the traveler to eat, so fasting does not add to his already difficult situation. This is why the Messenger of Allah (saas) has been reported as saying, "The journey is a type of punishment." He or she, however, would have to make up the day. The permission to not fast during a journey is the same as if a person decides to fast while on a journey, he can do so and the fast is valid.

The journey that may entail fast-breaking is the one that falls in the category of shortened prayers (Qasr), and the period of breakage is the period in which one can shorten the prayer.

What is Better, Fasting or Breaking?

In analyzing the case of the traveler, many scholars said the best, in this case, is what is easiest for the traveler (al-ashal), regarding fasting or not fasting, if they are equal for him, the best thing is to fast, for the following reasons:

This was the preference of the Prophet (saas) as related by Abi Darda (raa), who said: "We journeyed with the Prophet (saas) during Ramadan when it was an extremely hot (season). Some of us shaded ourselves with our hands, because of the extreme heat. No one was fasting among us except the Prophet and Abdullah bin Abi Rawahah. The Prophet broke his fast in consideration for his companions when he knew that the fast was getting the best of the companions and bringing on them an unnecessary hardship." (Muslim)

In another hadith reported by Jabir Bin Abdullah (raa): "When the Prophet (saas) journeyed to Makkah, in the year of victory, he fasted until he reached a place known as Kara'ah Al-Ghamin. He was informed that the companions who were fasting were having difficulty with the fast. So, they were waiting to see what he would do. The Prophet (saas) then requested a goblet full of water after Asr prayer and drank it while everyone was looking." (Reported by Muslim)

This hadith indicates how fasting is better during a journey unless there is unreasonable hardship.

Another reason why fasting is better is that it helps to meet the obligation of fast without any delay. For you do not know when death or sickness may come; besides, it is easier to fast when all the believers are fasting at the same time. This is why they say that the difficult obligations, when done with other Muslims, become easier. It is easier to fast the whole month of Ramadan; whereas, when a person misses one day of Ramadan, he may put off redeeming his fast until Sha'aban, one month before the next Ramadan.

If fasting is difficult for him during a journey, the traveler should break his fast. In the previous hadith reported by Jabir (raa), when the Prophet broke this fast because of the difficulty of the believers, he was told that some people insisted on fasting. The Prophet (saas) said, "they are rebels, they are rebels." (Muslim)

In another hadith by Jabir bin Abdullah (raa) said: "During one of the Prophet's journeys, he saw a heavy crowd around a man who was being shaded. The Prophet (saas) inquired, `What is this? They said `He is faster.' The Prophet (saas), said: `It is not righteousness to fast during a journey.'" (Muslim/Bukhari) 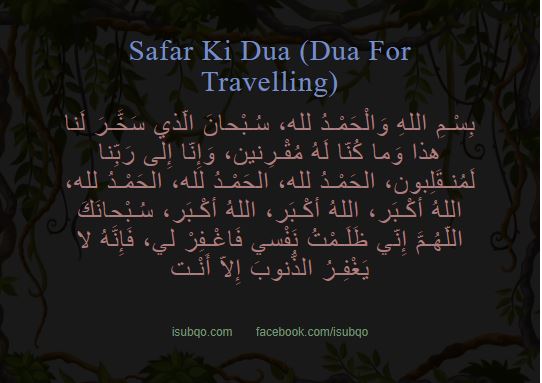 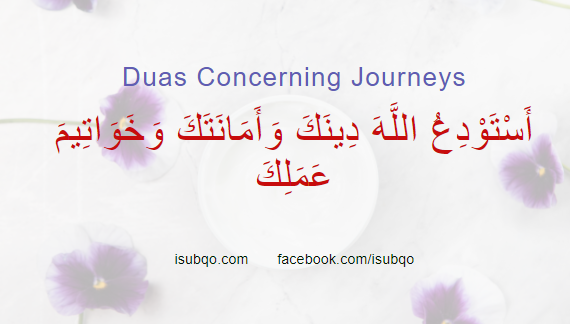 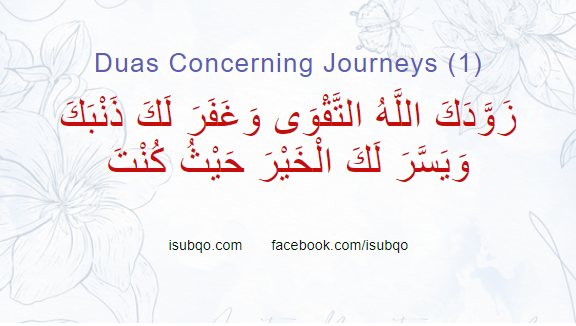 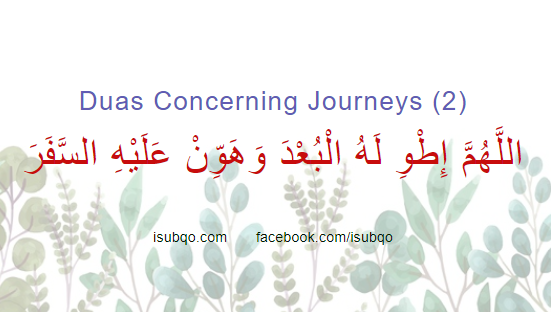 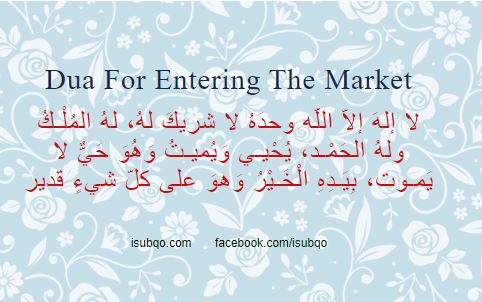 Dua for entering the market 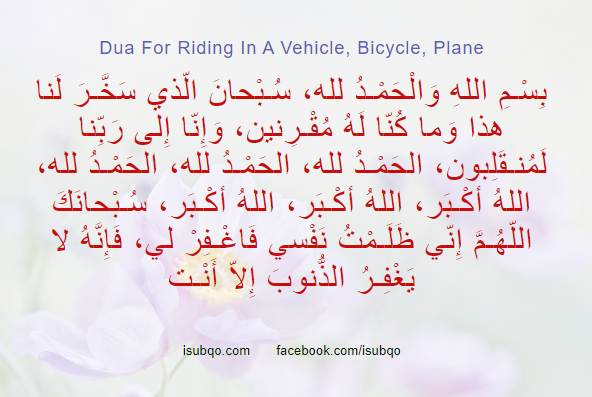 Dua for riding in a vehicle, bicycle, plane