The holy month of Ramadan is a Divine banquet. He has invited His servants to this banquet and kept open his hand of giving and bestowing. We need to acquire maximum rewards from all the bounties laid out by the Most Generous One. According to the sermon in which Rasulullah (Sallallahu alaihi wasallam) welcomed the month of Ramadan, he said that the days of Ramadan are the best of the days (compared to days of other months); its nights are the best of the nights and its hours are the best of the hours.1 Additionally, the reward of fasting is so great that in Prophetic Hadith, we are told that ‚Allah says, ‘Fasting is for Me, and I (alone) will compensate for it.

Therefore fasting in the month of Ramadan undoubtedly carries a huge reward which is beyond our imagination.

A devout servant after fasting for the entire day in obedience to the command of his Lord and Master is eager to achieve these rewards. The foremost of these rewards is the acceptance of the fast by the Master. It is unlikely that the all-Merciful God will reject the efforts of a person who has fasted during the month of Ramadan for the sole purpose of achieving His great pleasure. However, to achieve the rewards and His pleasure one needs to prepare for that moment when Divine bounties are being distributed. This is similar to preparing for graduation day after working for a degree over several years. The Holy Ma‘S}m|n (a) has taught us certain etiquette (adab) at the time of Iftar, i.e. when we open our fast. Some of these etiquettes are elaborated on here.

1. Give Sadaqah (charity) and feed those who are fasting.

It is said that charity wards off evil consequences. Having fasted the entire day, if there are any shortcomings in our efforts, the charity will help us purify our fast. Moreover, it is also rewarding. Imam Ali al-Rida (a) advised, ‚One who gives charity of one loaf of bread to a destitute at the time of iftar, Allah forgives his sins, and records for him the reward of freeing a slave from the progeny of [Prophet] Ismail. As for feeding those who are fasting, there are numerous Hadiths that encourage this noble act. Imam Ja‘far Al Sadiq (a) said, ‚When a believer feeds a (fellow) believer in Ramadan, Allah records for him the reward of freeing thirty believing slaves, and he has with Allah a prayer that is answered.

Where possible say your prayers (i.e. Maghrib Salat and its Nafilah) before opening your fast. Of course, if someone cannot extend the fast beyond Maghrib time on account of feeling hunger, thirst, and tiredness then it is better to open the fast and then say prayers. The same is the case if others (e.g. family members) are waiting for you to open the fast first, then you should not delay in doing iftar. [Mafatih p. 319] Imam Muhammad al-Baqir (a) said, ‚Precede the Salat over iftar; provided if you are with a community that begins with iftar, in that case then do not oppose them and join them in iftar. Otherwise, begin with Salat because it is better (afdhal) than iftar, and it is more beloved to me that your prayers are recorded whilst you are in the state of fasting.‛ [Shahrullah p. 173]

3. Do not say your prayers so fast that you no longer feel the pleasure of worshipping the Almighty at the end of the fasting day. Rasulullah (Sallallahu alaihi wasallam) advised Muslims in his famous sermon welcoming Ramadan, ‚O people. your backs have been burdened on account of your sins and disobedience, so lighten them through lengthening your prostrations. And know that Allah, the Exalted, does not punish those who say their prayers (well) and prostrate (for long).

4. Do not forsake Nafilah prayers in Ramadan, especially the Nafilah after Maghrib and ‘Isha Salat. So important are the Nafilah prayers after the Maghrib that in a Hadith from Imam Al Sadiq (a) we have been advised not to abandon them whilst traveling and when at home.

As for the Nafilah of ‘Isha, Imam Ja‘far Al Sadiq (a) has said that whoever performs this prayer and dies that night, he will be included amongst those who performed Salat al Witr in the last part of the night.

In the sermon of Ramadan, the Rasulullah (Sallallahu alaihi wasallam) said, ‚One who performs a recommended prayer [in Ramadan,] an acquisition from the hellfire is written for him.

Question: If I’m attending Jama‘at (congregational) prayers in a masjid/center where attendants are not given enough time between Maghrib and ‘Isha to say the Nafilah, then what is the best course of action?

5. Open your fast with halal food. These are food items that are: free from any illegal or doubtful earning, is Tahir (ritually pure) and if made from meat then the animal should have been slaughtered according to Islamic guidelines.

6. It is recommended to open your fast with dates, or something sweet & lukewarm water. Opening fast with halal dates increases the reward of one’s payers' manifold. Imam Al Sadiq (a) has suggested that when a person breaks his fast with lukewarm water, it cleans his liver, washes away his sins from the heart, and strengthens one’s eyesight and eye pupil.

7. Recite Surat al-Qadr, i.e. chapter 97 of the Holy Qur’an. Imam Ali Zaynul Abidin (a) said, ‚One who recites Inna Anzalnahu fi Laylatil Qadr at the time of opening and closing of fast, he is between these two occasions like the one who is stranded with his blood for the sake of Allah.

8. Plead to the Almighty for forgiveness. Rasulullah (Sallallahu alaihi wasallam) advised in his sermon ‚O people, your souls have been mortgaged by your deeds, so free them through your Istighfar. Having fasted for the entire day, this is the best time for us to plead for forgiveness. Rasulullah (Sallallahu alaihi wasallam) has suggested following when taking the first morsel. In the name of Allah, the Beneficent, the Merciful. O, He Who is great in forgiving, forgive me.

9. Recite some of the recommended Du‘as. Rasulullah (Sallallahu alaihi wasallam) said ‚Supplication of a fasting person at the time of iftar is answered.Following Du‘as are from Mafatih. Allahumma laka Sumtu, wa ‘ala rizqika aftartu, wa ‘alayka tawakkaltu O Allah, I have fasted for You, opened my fast from Your sustenance, and I have relied upon You.

Bismillahi, Allahumma laka Sumna, wa ‘ala rizqika aftarna, fataqabbalhu minna, innaka antas sam|‘ul ‘al|m. In the name of Allah. O Allah, we have fasted for You, opened our fast from Your sustenance. So accept it from us; surely You are all-Hearing, all-Knowing. 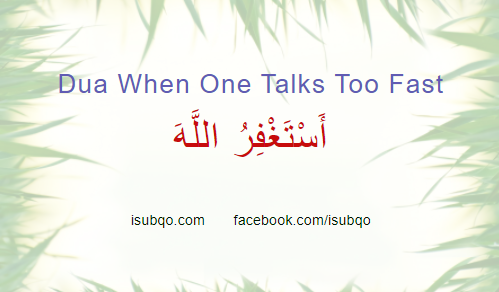 Dua When one talks too fast

Nullifiers of saum (fasting) in Islam

What to say if you see the crescent moon in Ramadan

For whom Ramadaan fasting is obligatory?